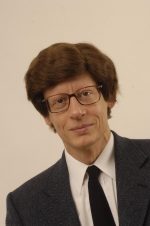 Pierre Gaspard was born in Brussels, Belgium, the 6th of December 1959. He carried out his high school studies at the « Athénée Fernand Blum » in Schaerbeek. Thereafter, he studied physics at the « Université Libre de Bruxelles » (ULB) from 1978 till 1982 and received his doctoral degree in 1987 under the supervision of Professor Grégoire Nicolis on homoclinic chaos in dissipative dynamical systems.

After a postdoctoral stay of two years at the University of Chicago from 1987 till 1989, he held a research position at the « Fonds National de la Recherche Scientifique » (FNRS Belgium) from 1989 till 2004.

He was appointed Lecturer at the ULB in 1996 and obtained a position of Professor in 2004 within the Department of Physics.  Since 2005, he is the director of the « Service de Physique Non-Linéaire et Mécanique Statistique » of ULB.  He is teaching in the Departments of Physics, Mathematics, and Chemistry of the Faculty of Sciences of ULB.

He has been invited Professor at the « Université Pierre et Marie Curie, Paris VI » in 1996 and has been visiting the Max-Planck Institute for the Physics of Complex Systems (Dresden, Germany), Cambridge University (United Kingdom), Utrecht University (The Netherlands), the University of Maryland (College Park, USA),  Waseda University (Tokyo, Japan), among others.

He received, from the Royal Academy of Sciences, Letters and Arts of Belgium, the Théophile DE DONDER prize of Mathematical Physics in 1988 and the Adolphe WETREMS prize of mathematical and physical sciences in 1995.

He has been or is member of the editorial boards of the journals :

He is member of the C3 Commission of Statistical Physics of the International Union of Pure and Applied Physics (IUPAP) from 2002 till 2008 and associate member of the C16 Commission of Plasma Physics of IUPAP from 2003 till 2006.  He has been member of the Committee of the conferences « Dynamics Days Europe » from 1997 till 2005.  He is member of the Local Scientific Committee of the International Solvay Institutes of Physics and Chemistry. He has organized or co-organized six international conferences, including the XXth Solvay Conference on Chemistry « Chemical reactions and their control on the femtosecond time scale » in 1995.  He has published a monograph entitled « Chaos, scattering and statistical mechanics » by Cambridge University Press and about 150 articles in international journals of physics and chemistry.

The research field of Pierre Gaspard is nonlinear and statistical physics, which is today one of the most fundamental and active domains of physics at the frontier with the other natural sciences and, in particular, chemistry and biology. Pierre Gaspard and his research group are working in the Interdisciplinary Center for Nonlinear Phenomena and Complex Systems of the Université Libre de Bruxelles.  This Center was founded in 1991 by Professor Grégoire Nicolis and coworkers and is devoted to nonlinear science and the modeling of complex systems.

Pierre Gaspard’s work has been devoted to the development of theoretical and mathematical methods to bridge the conceptual gap between the equations of motion of physics and the complex phenomena they are supposed to describe such as irreversible processes, oscillations and pulsations, chaotic behaviors, or the generation of fractals, among others. He has contributed to nonlinear dynamics, the theory of chaos and fractals, nonequilibrium statistical mechanics, and quantum mechanics.

One of the major preoccupations of the contemporary society is to perform certain tasks in given times with given energy resources.  In this context, it is essential to known the characteristic times of the natural phenomena.  This question is important not only at the macroscopic scale of the order of the meter or more, but also at smaller scales where the functional properties of materials such as the electric resistance or the energy dissipated by friction also depend on the characteristic times of the system of interest.  For electric resistance or friction, the characteristic times are those of the motion of the particles composing matter.  This motion is extremely irregular but in principle ruled by the same Newtonian equations as the motion of planets around the Sun.  What is the difference between these motions ?  The motion of planets is periodic and described by Kepler’s ellipses, although the motion of particles in matter is typically chaotic.  This chaoticity is also observed in the turbulence of fluids where it limits our ability to make reliable predictions in meteorology for instance.  Even the smallest lack of knowledge on the state of a chaotic system at a given time may rapidly be amplified during its latter time evolution.  This sensitivity to initial conditions has for consequence that the motion of chaotic systems should be mathematically described in terms of statistics and probability.  The contributions of Pierre Gaspard have been to show that this idea can be mathematically developed in order to understand better the properties of chaotic systems.

One of his main results has been to show that irreversible processes such as electric resistance can be understood at the level of the irregular motion of particles in matter with the mathematical tools of the theory of chaos. One of the founding fathers of the theory of chaos is the mathematician Henri Poincaré (1854-1912) who was the first to describe the geometry of chaotic motions. In chaotic systems, the diversity of motions is one of the highest possible.  Often, the set of all the possible motions form fractal objects.  An example is given in the attached figures which depict a fractal generated by an irreversible process similar to electric resistance.  In this example, we could say that the details of the fractal provide a microscopic picture of electric resistance in this particular system.  This fractal gives an idea of the complexity of the possible motions of the particles.  Beside their geometrical aspects, the chaotic motions can be characterized in terms of probability.  In this context, mathematical relationships have been recently established between resistance, chaos, fractal, and probability.  Since electric resistance is an irreversible process responsible for energy dissipation and entropy production, these relationships shed a new light on the second law of thermodynamics and are nowadays actively studied worldwide in nonlinear and statistical physics.  Applications concern, in particular, the nanosciences where the new results contribute to understand how nanosystems such as molecular motors or proteins can perform their tasks with given energy.

The scale of the nanometer is just above the size of the atoms, which are in principle described with quantum mechanics.  In quantum mechanics, the time evolution is ruled by the famous Schroedinger equation instead of Newton’s equation of classical mechanics.  Both equations can be used to describe the time evolution of natural systems so that the comparison between both descriptions is a fundamental question.  In this context, Pierre Gaspard has contributed to develop mathematical methods bridging the gap between quantum and classical mechanics as well as algorithms for the control of quantum systems.  These methods and algorithms have applications to electric resistance in electronic nanodevices, as well as to chemical reactions and their control in femtochemistry.